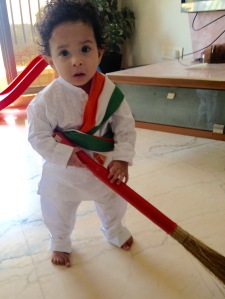 Right now, if you come home, chances are that you will see my one year old boy with a broom cleaning the living room. Or with a mop wiping the tables or furniture. Or if I come to your house with him, the most interesting thing he will find and want to play with is a broom. Aka Jhadu. No wonder this boy was born under the Swatch Bharat regime, but it becomes really awkward when he sees sweepers on the streets and howls at them asking for their grass brooms with long sticks. But thats for now. I am sure when he grows up he will want to become a bus-conductor doing ticket-ticket, a driver doing beep-beep, or a soldier with guns and tankers. His dad already wants him to join the Indian army, but thats not happening if I have only one son. Heck if he is the only child I have, I am not even sending him away for college.

My father and mother in law started the business and husband and I are the second generation running the company. It is stupid to assume that Arjun-the third generation will want to join the business and take it forward. But my conservative middle-class upbringing will always want to tell him to get a good professional degree.

I remember, I was eight when Aishwarya Rai became Miss World. That was a very impressionable age and I followed her journey on television very closely. I loved the way she exclaimed and cried when she won the title, her petite pose when the crown was placed on her head, how she got interviewed later constantly for months after that and the whole concept of being ‘Miss World’. It was fascinating for me. I would later stand in front of the mirror and pretend to wear a jewelled crown and answer the flurry of questions. Who am I, what do I like, what is the most important thing for me in life, how would I like to eradicate world poverty, what do I think about equality, what are my aspirations for the future and so on. Alas, my height never increased more than 5 feet 2 inches and I have never been skinny, so those dreams got washed off pretty quick, but being a child and thinking you can become anyone in the world – its amazing.

There is a orphanage in Mumbai which houses several teenage girls . I used to volunteer there on Saturdays with the little kids. The director once asked me to guide those girls and show them education options which are not very expensive. Chartered Accountancy course being one of them, he wants me to mentor the girls and share my experiences being a CA. I never got to that and later I got pregnant and had the child and so this went to the back of my head. But I think the truth is:  I dont feel adult enough to mentor anyone. It feels too much of a responsibility. Now as I write this, I realise I should do it. Those girls dont have limitless opportunities like us or our kids, but they should be able to see some paths which they can walk on.

There was a period when my brother wanted to be a chef. Now I am not sure if he really wanted to be a chef or he was saying that because he knew dad would not approve, but as a matter of fact he did not go for it. He completed his Chemical Engineering in Mumbai, although quite grudgingly. Now he is in the USA doing MBA and I often wonder if he will become a Chef or get some culinary degree in future. Heck, no one ever thought I will go to Cordon Bleu to study Patisserie. I could barely make Maggi when I got married. But I did. And here I am, now thinking of quitting the baking side of blogging and concentrating on writing.

So who knows right? Arjun might decide to join the business or he might just join the Indian army. Or become the Chief Cleanliness Officer. We are yet to find out.

Temples and stuff that goes on there. #ambejogai #temples #hindutemple